You’ve heard of the movie “Miracle on 34th Street.” This is about the miracle on LaSalle Street — the mummy miracle. “The Mummy” was the nickname of a stalled high-rise hotel at LaSalle and Huron streets, its superstructure wrapped in a protective tarp, which just sat there, pitifully Christo-like, for four years. Like the empty foundation pit of the Chicago Spire, it was an ugly symbol of the recession’s grip on Chicago. Now “The Mummy” has been reincarnated as the just-opened Godfrey Hotel, a playful, powerfully sculpted addition to the cityscape. The hotel represents a welcome antidote to River North’s bland concrete high-rises and potent evidence that good architecture can, every so often, overcome obstacles that seem insurmountable. 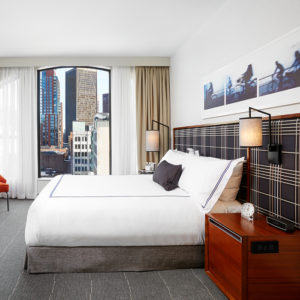 Designed by Chicago architects Valerio Dewalt Train, with interiors by the Gettys Group, the 16-story boutique hotel rises in both height and quality above such nearby landmarks as the retro, super-size McDonald’s on Ontario Street. What could have been just another cereal box of a building is an eyegrabbing composition of floating masses, shifting planes, bold shadows, and bridge-like trusses, successfully synthesized into a muscular Chicago whole. Its promoters call it “Jenga chic,” a reference to the game in which each player takes a piece out of a tower of wooden blocks, then puts that piece on the tower’s top, creating a structure of increasing height and instability. 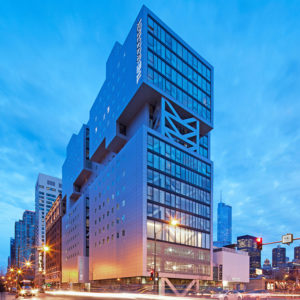 The $50 million-plus project began as a planned Staybridge Suites hotel backed by Duke Miglin, son of the cosmetics entrepreneur Marilyn Miglin and the late real estate developer Lee Miglin. The concept, more than a decade old, took shape in the go-go days of 2003. By 2008, as the downturn deepened, creditors hit Miglin with a foreclosure lawsuit. He eventually relinquished control to the Oxford Capital Group, which had transformed a former SRO next door into the trendy Hotel Felix, and Cube Capital, an international investment firm.

Oxford put up the tarp to protect the exposed skeleton of the unfinished building, but Chicago’s cutting winds ripped it apart. “At times it looked like the Mummy Building unwrapped,” Oxford’s president, John Rutledge, recalled. Some of the building’s exterior walls were damaged, he said, and had to be torn off. When construction resumed in 2012, Oxford had to shore up steel and concrete that had deteriorated due to the pounding inflicted by four Chicago winters.

To his credit, Rutledge stuck with the original design of the building, including the innovative “staggered truss” structural system that Miglin had championed. In such a setup, steel trusses spanning a building’s width are placed in alternating rows from one floor to the next. Proponents tout the system as a way to create column-free spaces and speed construction with pre-assembled parts. In this case, the system shaved months off the construction schedule, the architects said, but the recession added years. It was a classic instance of “hurry up and wait.” What the downturn did not affect was the memorable expression of the trusses devised by the chief architects, Joe Valerio and David Jennerjahn. 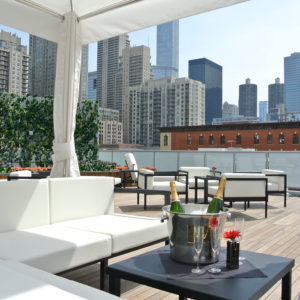 Their design reveals the structural members on the Godfrey’s east- and west-facing facades with the clarity of an X-ray. It’s not the John Hancock Center, Chicago’s greatest structurally-expressive building, but it’s still plenty gutsy. In a further blow to cereal-box banality, the architects treat the tower’s middle floors like a Jenga block, shifting their mass toward the Loop skyline so the floors set back from some angles and project from others. The Godfrey would have been a monolithic monster without this move. Its small-windowed, metal-sheathed north and south sides come perilously close to repeating the grim monotony associated with Chicago’s Prudential Building. The Jenga block treatment redeems these facades with depth and sculptural dynamism.

The design suggests process, not permanence, and something of the precariousness of modern life. It’s still a hotel, of course, where people will meet, drink, eat, sleep and cavort. Yet the interiors are not formulaic, as they might have been had the project been a suites hotel catering to business travelers on an extended stay. 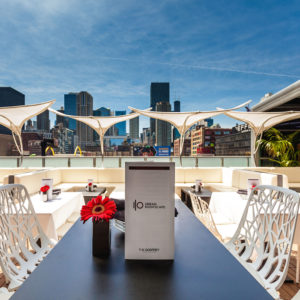 Oxford and the architects made two crucial changes that connect the hotel to the city: They brought the lobby from the 4th floor to the ground floor and they turned the roof of the hotel’s parking garage into a rooftop dining and party zone with a panoramic skyline view. Called “I O” (for indoor-outdoor), it comes with a glass ceiling and walls that retract. Gettys’ interior touches are hip without being obnoxious, a nice change from New York boutique hotels that treat guests as though they’re privileged to be staying there. The oval-shaped lobby tells you you’re not in Kansas anymore, and curving banquettes offer sexy nooks in which visitors can see or be seen.

The rooms feel large, a legacy of the suites concept and a decision by Gettys’ to eliminate walled-in kitchenettes. The rooms come in a variety of quirky sizes, a consequence of the hotel’s unusual massing. My favorite was an end room, with one of the diagonal trusses slicing alongside its band of windows. A blocked view? Nope. The interior architects had put a little pillow on a flat spot next to the truss. A perfect place to take in the surrounding cityscape, to which the Godfrey adds much-needed visual vigor.