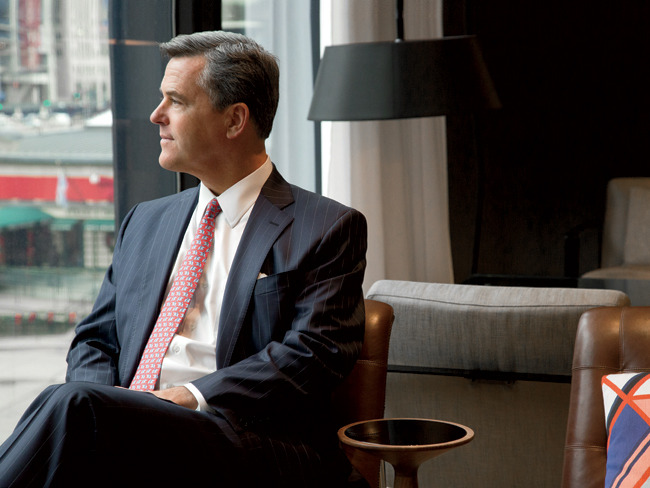 John Rutledge outside The Langham hotel, one of Oxford Capital Group’s signature properties.

There are foolish gambles, and there are calculated risks. For hotel real estate and private equity investor John Rutledge, the founder and CEO of Chicago’s Oxford Capital Group, avoiding the former has made all the difference. “I’ve never been a cowboy,” he says (though with his lanky frame, Rutledge does resemble one). “I’m not a reckless risk taker.”

Rutledge’s philosophy has paid off: By taking calculated risks and pulling back during economic downturns, the businessman has made a name for himself as a keen hotel developer known for shrewd acquisitions. Recent major local successes include theWyndham Chicago, the Hotel Felix, and the stunning new Langham in Mies van der Rohe’slandmark former IBM building. The latest jewel in Rutledge’s crown is The Godfrey, a 16-story luxury boutique hotel at 127 West Huron Street, a Cubist-style building whose original owners planned it as an extended-stay hotel but which Rutledge and his team haverepurposed into a sleek, modern property with what they expect to be the largest hotel rooftop deck (15,000 square feet) in Chicago. “Many of these large-scale developments are like making a movie,” he says. “They are multiyear journeys. There are all these milestones and sub-mountains to climb—they are the base camps of Everest, before you finally get to Everest.”

It’s all part of Rutledge’s mantra: To be a disciplined investor first, a developer second. That’s how he was able to gain another recent acquisition: the iconic former London Guarantee Building at 360 North Michigan Avenue, which sits on the Chicago River and which he is redeveloping into a 450-room hotel. Like many of his other redevelopments, Rutledge plans on juxtaposing the building’s classical façade with a strikingly contemporary interior. “This is a piece of Chicago’s architectural patrimony; it’s a landmark,” he attests. “That intrigues me—the unique design and the unique things we can do to it—but I also have a sense of responsibility. I want to make sure we do it right.”

That aspect of contrast and multidimensionality through his buildings is something Rutledge consciously strives for both professionally and personally. “I’ve always been drawn to the entrepreneurial story,” says Rutledge, who also serves as an angel investor in companies likeArgo Tea, Homemade Pizza Company, and Health Integrated. “The story of diligence, hard work, and creativity, and maybe a little guts and maybe a little luck—you add it all up and forge your own path.” 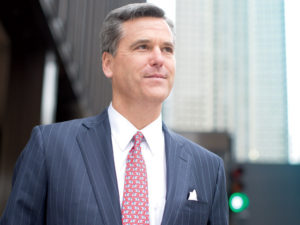 Growing up in Wilmette, Rutledge first fell in love with architecture as a New Trier High School student, when during summers in Lake Geneva he served as a tour guide on the lake. Ray-Bans on and driving an old twin-engine, 32-foot Chris Craft boat past the area’s lakefront homes, he’d tell boat passengers about the architectural history of the residences. That summer job sparked an interest in learning more about real estate developers and how they collaborated with their teams. From there, Rutledge earned a bachelor’s degree in economics with an emphasis in real estate from the University of Michigan, and, drawn to the independence of “paddling my own canoe,” cofounded his first company, Oxford Realty Corporation, at age 24.

Rutledge went on to earn his MBA in international finance and economics from the University of Chicago’s Graduate School of Business, later studying at Northwestern University, Oxford University (Christ Church), and Harvard. In 1994, during his second year of business school, he cofounded his second company, Oxford Capital Partners, and created his current company, Oxford Capital Group, a decade later. “I would rather push myself really hard than be pushed,” he says.

A vintage taxi from The Langham.

Now married with two sons, 9 and 11, Rutledge says his ultimate challenge is to become “a better ‘life decathlete’.… My role models are people who live a rich, multidimensional life,” explains the developer, who serves on the advisory board of the Metropolitan Capital BankCorporation and the World President’s Organization. “Individuals who have a close family life, who are professionally accomplished, but are civically involved and may go to church; just very [multilayered].”

And though Rutledge may not take reckless risks in the business world, he is a serious thrill-seeker, counting sky diving, helicopter skiing, scuba diving at the Great Barrier Reef, and treks to the North Pole and through the jungles of Thailand among his many exploits. “I definitely have a zest for life,” he says, “for adventures and for new experiences.” No surprise, then, that Rutledge’s favorite book is the ultimate adventure: The Odyssey, which he calls a good metaphor for life. Whether developing hotels or working to improve himself, says Rutledge, “it’s all about the journey.”